If you have been writing CSS for a while, you must have at some point in time felt the need for variables. CSS custom properties are somewhat like CSS’s own implementation of variables. However, when used properly, they can be so much more than just variables.

CSS custom properties allow you to:

Although support for CSS custom properties is a bit of a rocky path at the moment, and some browsers support them under flags that need to be activated or set to true beforehand, their support is expected to increase dramatically moving forward, so it’s important to understand how to use and leverage them. 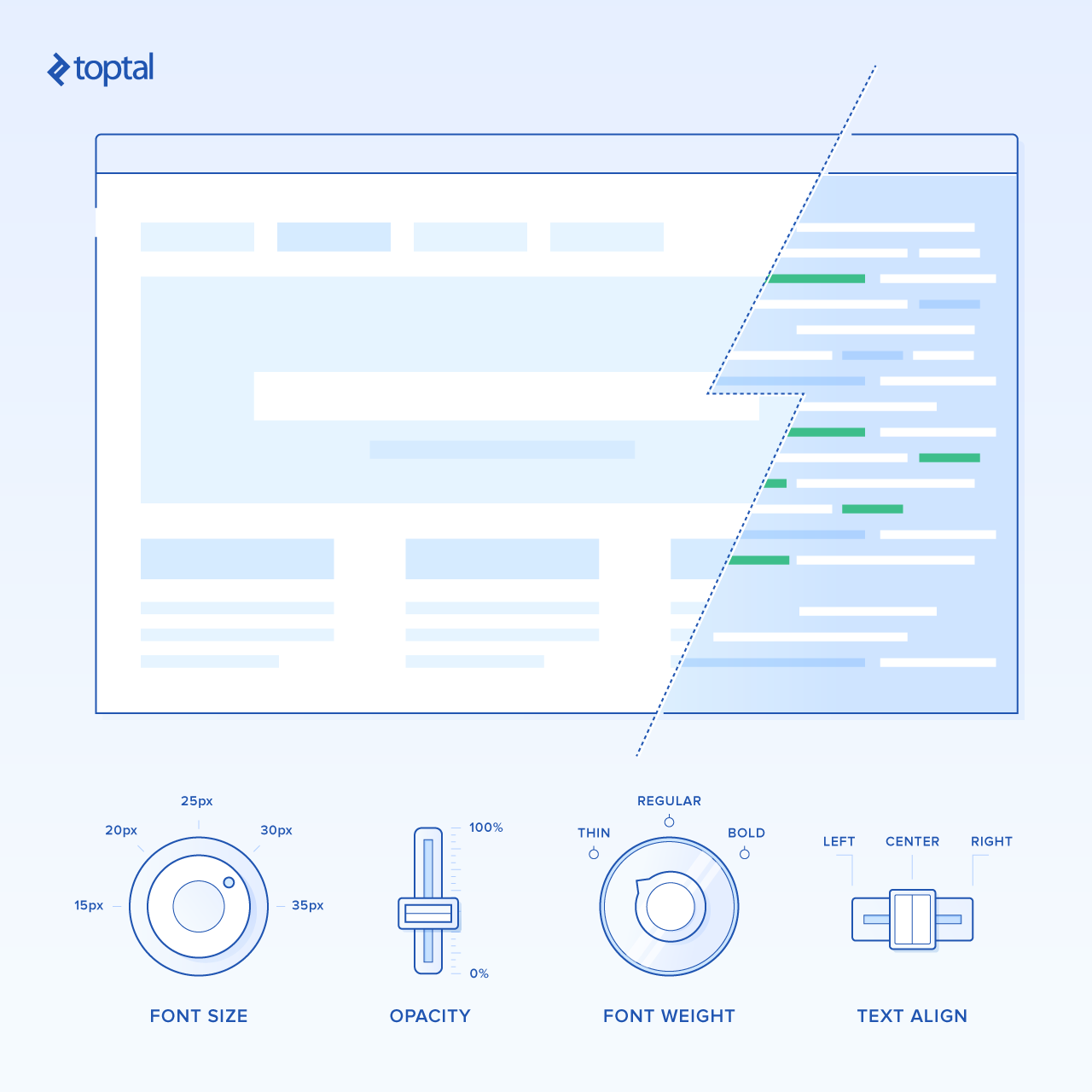 In this article, you will learn how you can use CSS Custom Properties to make your stylesheets a bit more dynamic, perhaps making that extra Sass/LESS step in your asset pipeline obsolete.

Before we begin to discuss CSS custom properties, it should be noted that for a long time now, CSS has had a sort-of variable, and that is the currentColor keyword. This rarely used but widely supported variable, refers to the current color value of an element. It can be used on any declaration that accepts a color value, and it cascades perfectly.

Let’s take a look at an example:

In addition to cascading, this can also produce the following:

The main issues with currentColor, aside from the fact that it wasn’t in the specification as a variable per se, is that it only accepts the value of the color property, which can make it difficult to work with in some cases.

One of the main advantages of using CSS pre/postprocessors is that they allow for values to be stored in a keyword and have them scoped to a certain selector if necessary.

The current specification for native CSS custom properties covers all the same behaviors as pre/postprocessor variables. This enables you to store color codes, sizes with all of the known units, or just integers if needed (e.g., when you need to use the same divisor or multiplier).

The syntax for CSS custom properties is a bit weird compared to other languages, but it makes a whole lot of sense if you compare their syntax with other features in the same CSS ecosystem:

Now, you might be thinking: “What sort of syntax is that!?”

Well, Lea Verou explains the reason for this “dash-dash” syntax with absolute simplicity, as she says in her amazing talk, CSS Variables: var(–subtitle):

We can retrieve the value of the custom property using the var() function, which we can use everywhere except for selectors, property names, or media query declarations.

It is worth noting that while pre/postprocessor variables are only used at compilation-time, CSS variables can be used and updated dynamically. What does this mean? It means that they are preserved in the actual CSS stylesheet. So the notion that they are variables will remain even after the stylesheets are compiled.

To make it more clear, let me illustrate the situation using some examples. The following block of code is part of a SASS stylesheet:

This snippet of SASS declarations and rules compiles to CSS as follows:

You can see that both the properties inside :root and the media query get lost after compilation, because SASS variables cannot exist inside a CSS file (or, to be more precise, they can be forced to exist in a CSS file, but are ignored since some of their syntax is invalid CSS), so the variable’s value can not be updated afterwards.

Now let’s consider the same case, but applied using only CSS Variables with no CSS pre/postprocessor applied (i.e., without any no transpilation or compilation being performed):

Obviously, nothing changes since we haven’t compiled/transpiled anything, and the value of the custom property can be updated dynamically. So, for example, if we change the value of --value using something like JavaScript, the value will update in every instance where it is called using the var() function.

The capabilities of custom properties make this feature so powerful that you can even do things like autoprefixing.

Lea Verou sets an example using the clip-path property. We begin by setting the value of the property we want to prefix to initial but use a custom property, and then proceed to set each prefixed property’s value to the custom property value:

After this, all that’s left is changing the value of the custom property inside a selector:

If you’d like to know a bit more about this, check out Lea’s full article on autoprefixing with CSS variables.

As was mentioned, browser support for CSS Custom Properties is still largely non-standard. So how can this be overcome?

This is where PostCSS, and its plugin, postcss-css-variables, comes into play.

In case you’re wondering what PostCSS is, check my article PostCSS: SASS’s New Play Date, and come back to this after you’re done. You’ll then have a basic idea of what you can do with this amazing tool and won’t feel disoriented when reading the rest of the article.

With the postcss-css-variables plugin, and its preserve option set to true, we can keep all the var()function declarations in the output and have the computed value as a fallback declaration. It also keeps the computed --var declarations. Keep in mind that, using this PostCSS plugin, custom properties can be updated dynamically after the transpilation process, but fallback values will remain the same unless they’re specifically targeted and explicitly changed individually.

If you’re looking for a pre/postprocessor-free way to use CSS variables, you can always check the current support manually with the CSS @support rule and apply a proper fallback when support is patchy or non-existent. For example:

Changing the value of a custom property using JavaScript

I’ve been mentioning throughout this whole article that variables can be updated using JavaScript, so let’s get into that.

Say you have a light theme and want to switch it to a dark theme, assuming you have some CSS like the following:

You can update the --text-color and --background-color custom properties by doing the following:

Over the years of development and discussion regarding the specifications of CSS Custom Properties, some interesting use cases have emerged. Here are a few examples:

Theming: Using a set of themes for a site is rather easy when implementing CSS variables. Want a light or dark variation of your current style? Just change the value of some custom properties using JavaScript and you’re done.

Spacing tune-ups: Need to fine-tune the spacing of a site, say a gutter between columns? Change the value of a single CSS variable and see this change reflected site-wide.

CSS custom properties are a powerful and innovative way to bring more life to your stylesheets, introducing completely dynamic values for the first time in CSS.

The spec is currently under Candidate Recommendation status, which means that standardization is right around the corner, a good reason to dive deep into this feature and get the most out of it.

The original post was published by Nicolás Engler on the Toptal Engineering Blog.

You may know that TinyMCE is an incredibly flexible WYSIWYG editor. Speaking of CSS, it is usually desirable that TinyMCE’s editable area has the same styling as the surrounding content. This can be achieved with the content_css option, which enables you to extend external css into the editable area. Learn more about TinyMCE on our website.

Nicolas Engler
Nicolás is a UI/UX designer and front-end developer with over six years of experience. He knows that dynamism and proactivity are the top attributes a developer must have. He's always looking to learn something new on each project, and work with cutting-edge technologies. He considers himself an advocate of web standards, and loves to be involved in the W3C discussion boards for new specifications and drafts.